141mm QR. A new "standard"… just what the bike industry needed! Can you get a bike with this new axle width to work on a Wahoo KICKR trainer?

T his all started for me after picking up a new 2018 Salsa Fargo 29er. On Salsa’s website, they list the frame as being compatible with 135mm QR, 142x12 thru-axle and 148x12 thru-axle. The standard 29er Fargo build comes with a rear quick-release wheel, so the bike shop and I assumed it was 135mm. Wrong. I got home and the bike frame was too wide to fit on the standard 135mm QR fittings of the KICKR. After taking some measurements, hitting the interwebs, and talking directly to Salsa, I figured out I had a "new and improved!" 141mm Boost QR. Yup, it’s a thing. 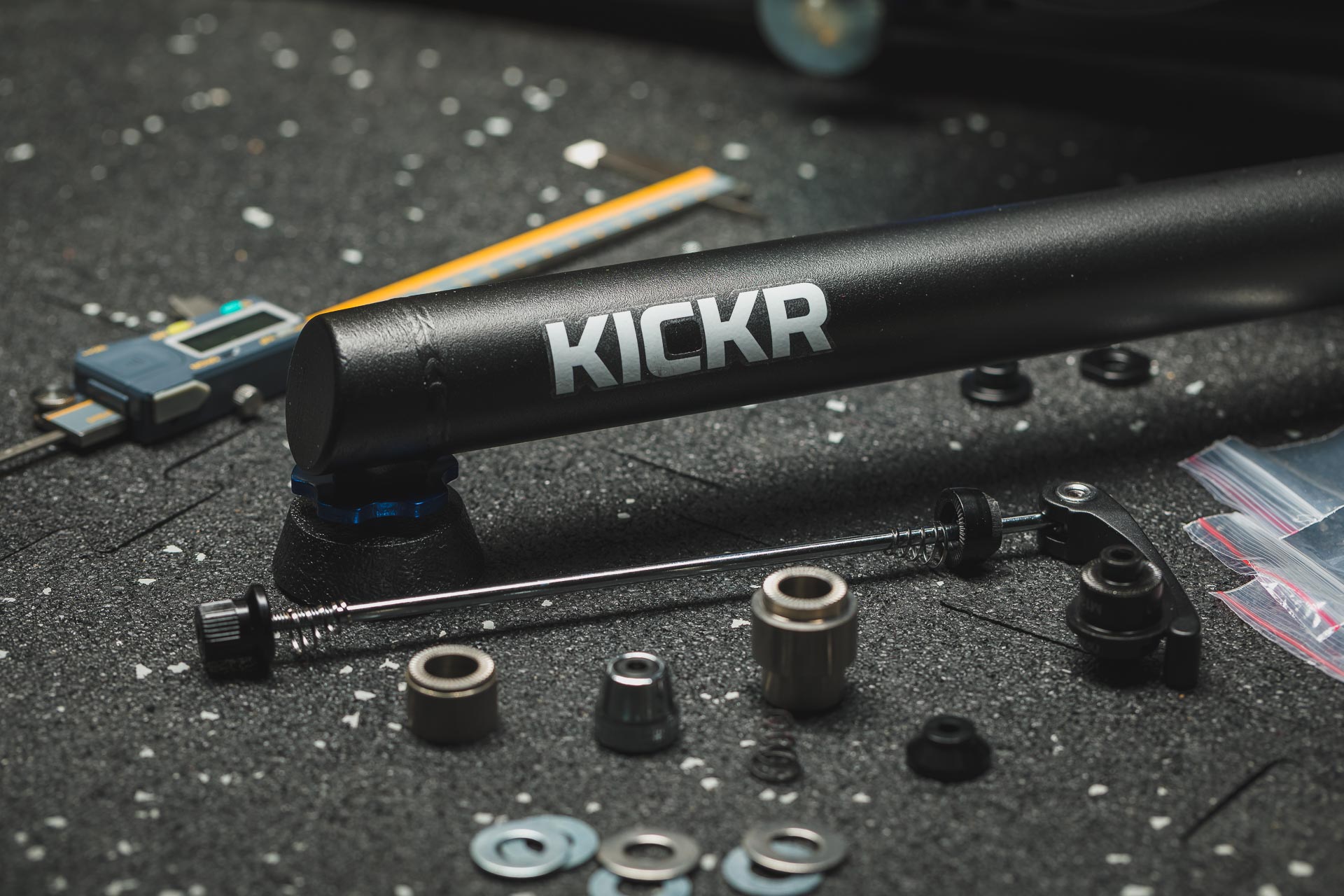 From what I can gather, this new 141mm QR standard is set to replace the "old" 135mm QR, and they are sort of calling it the Boost version of quick-release hubs. Thru-axles recently went through this with the jump from 142x12 to 148x12 Boost (6mm increase, see the similarity?) in the rear hub. According to Salsa, they moved to this hub spacing for the Fargo to increase compatibility and stability for 27.5+, 29 and 29+ wheelsizes. That doesn’t make a whole ton of sense to me, because they could just as easily fit the Fargo with a 142x12 thru-axle (or even 148x12) just by using different Alternator plates that they already offer. It probably came down to money. A QR hub is cheaper than a thru-axle. 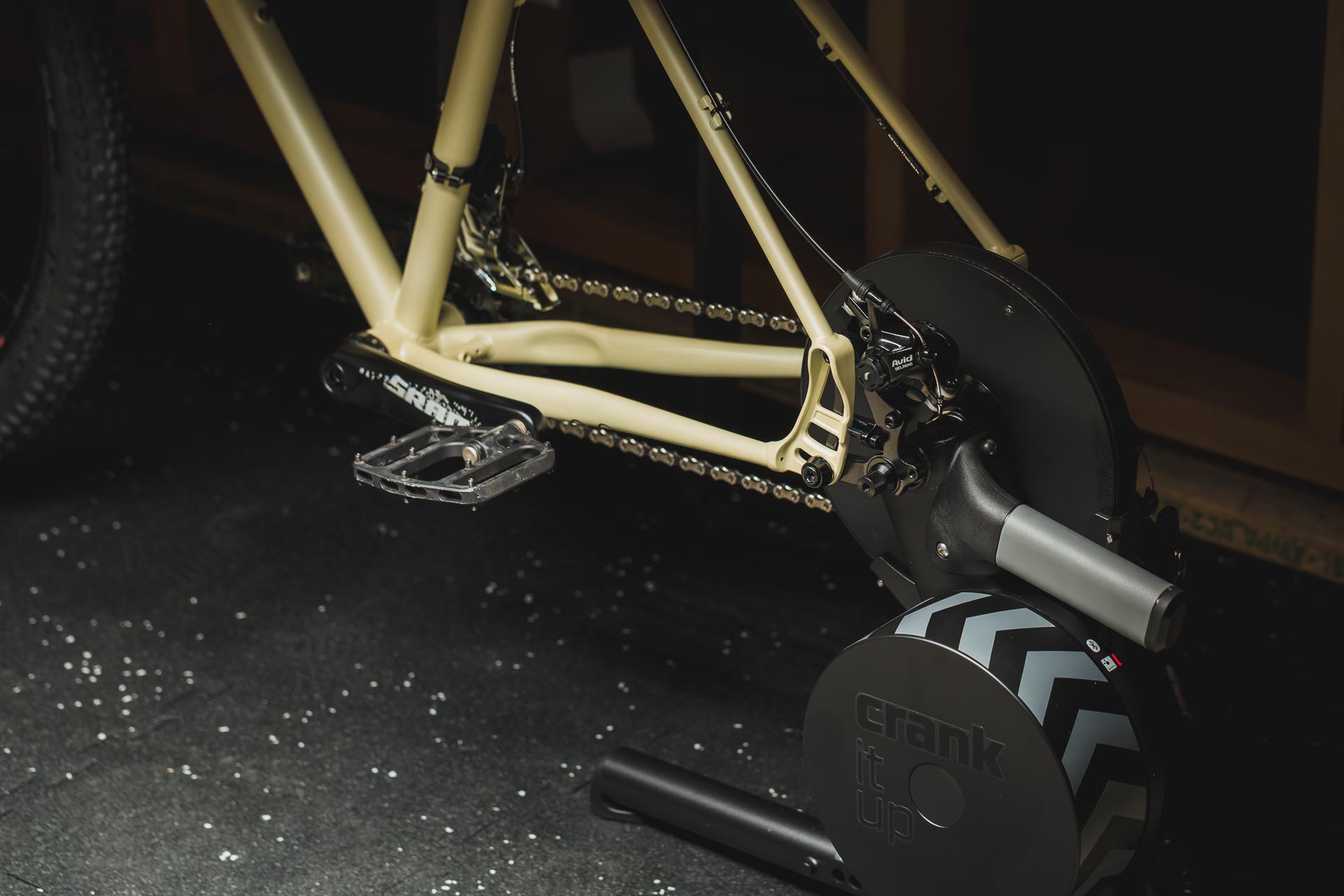 How to fit it to a KICKR

The 2017 KICKR comes stock with fittings for 130 / 135mm QR, 142x12 and 148x12 thru-axles. The 142mm hub spacing would be close enough for me for the 141mm… but those fittings have a huge hole in them for a 12mm thru-axle, not a tiny 5mm quick-release rod. The magical key to this is Wahoo’s older 142x12 Thru Axle Adapter. This kit makes me happy and sad. On the one hand, it’s currently the only way to rig a 141mm QR onto the KICKR; on the other hand, you only need two of the 6+ pieces that comes with the kit, and some washers of your own. The kit is around $30. Not bad I guess, if you consider the alternative is custom machining a fitting, changing wheel hubs, or using a different bike.

I used two pieces from Wahoo’s adapter kit. One is the special QR threaded cap/nut, the other is the 142x12 smooth black insert that fits directly into the KICKER. A normal QR threaded cap just has a flat knurled side that crushes against the bike’s frame, with the bike frame's weight being supported by the hub’s end cap that the QR axle slides through. The QR axle never touches the bike frame. Wahoo’s adapter piece takes that hub end cap protrusion and integrates it as part of the nut itself. This is hard to explain, so check out the photos. 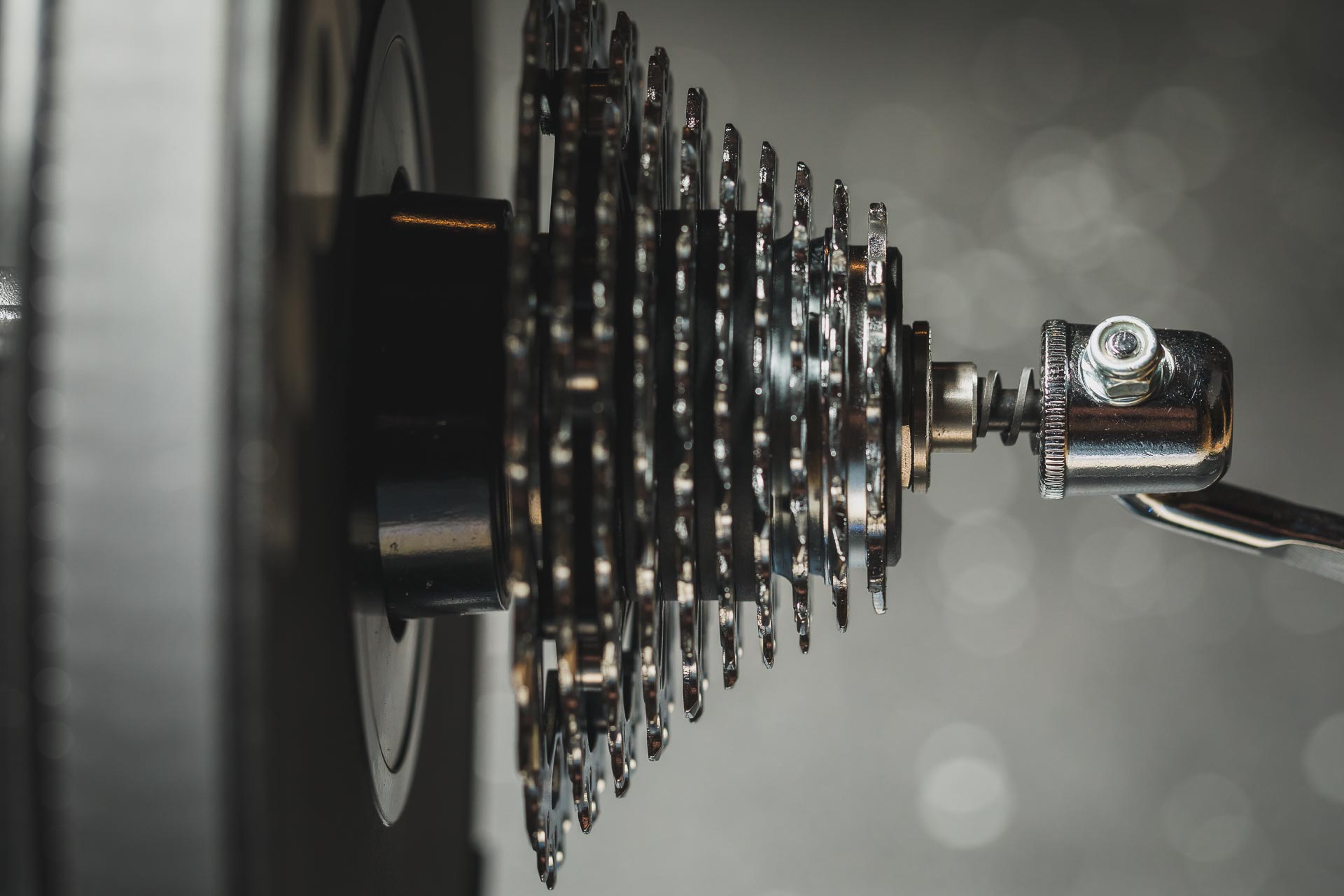 Leave the driveside of the KICKR stock, with the silver QR fitting inserted. 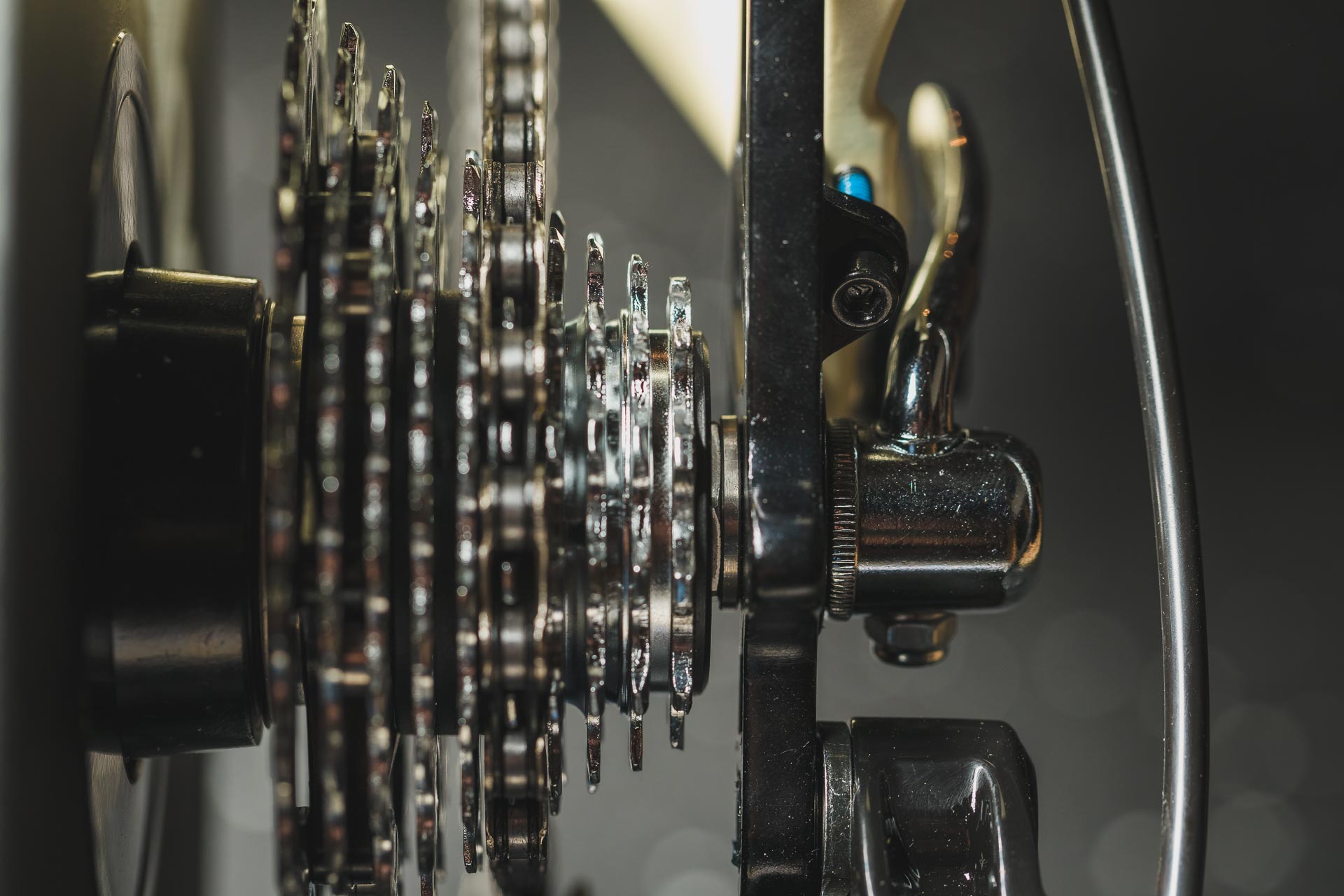 Leave the driveside of the KICKR stock. All you need to do is flip the QR skewer so the cam lever is on the driveside. 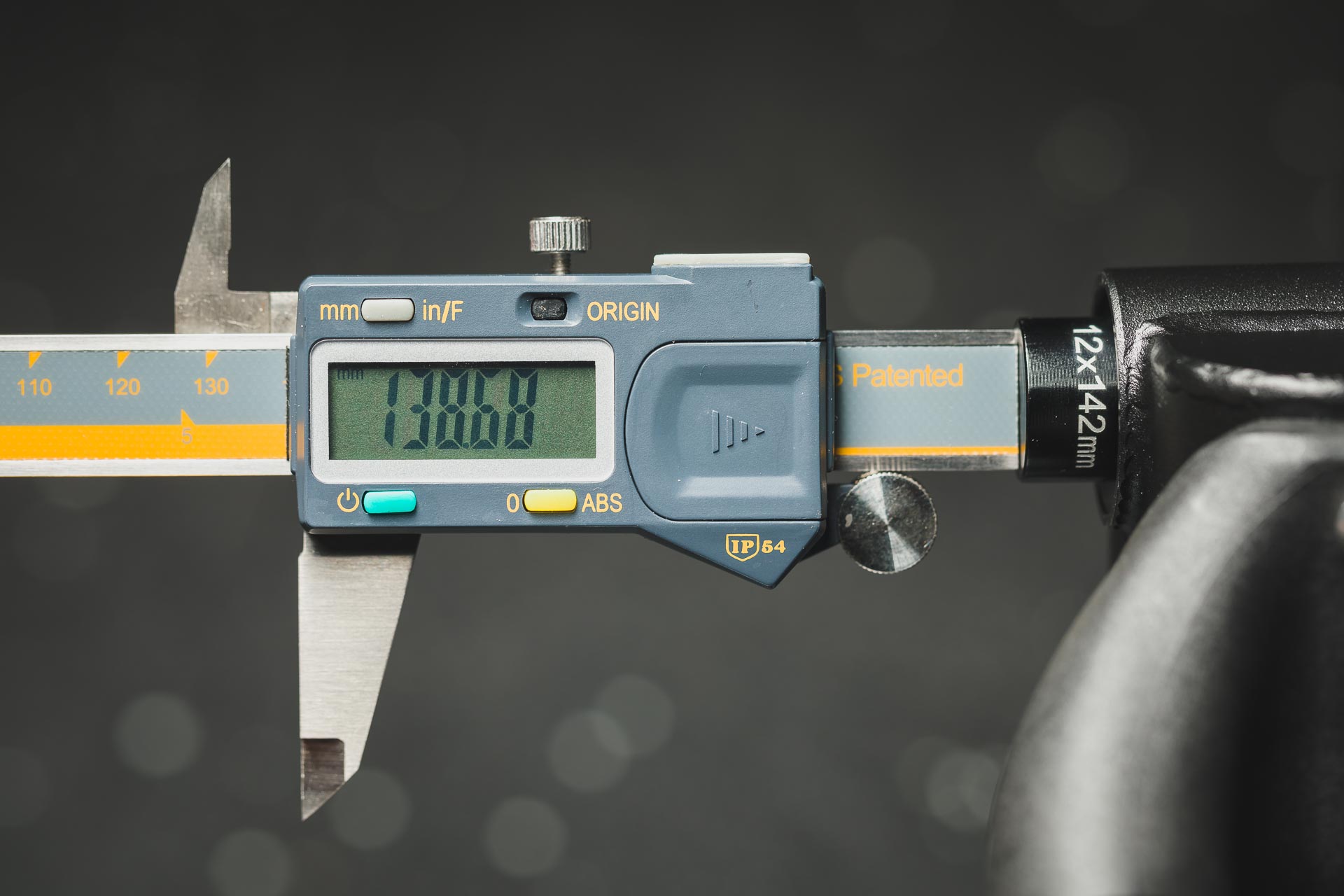 The width of the KICKR hub without the washers. Still too skinny. 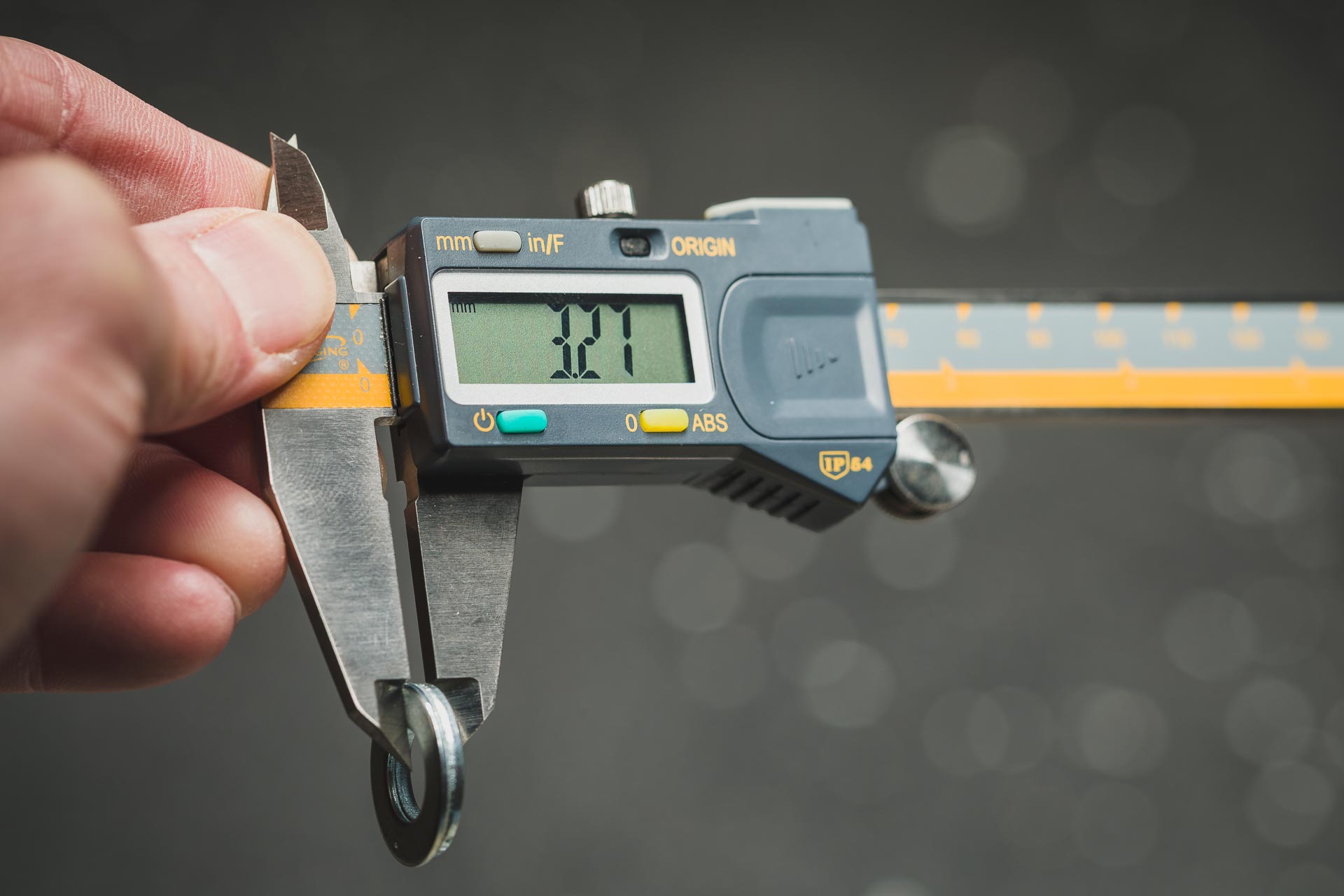 My two washers, measuring 3.27mm together. 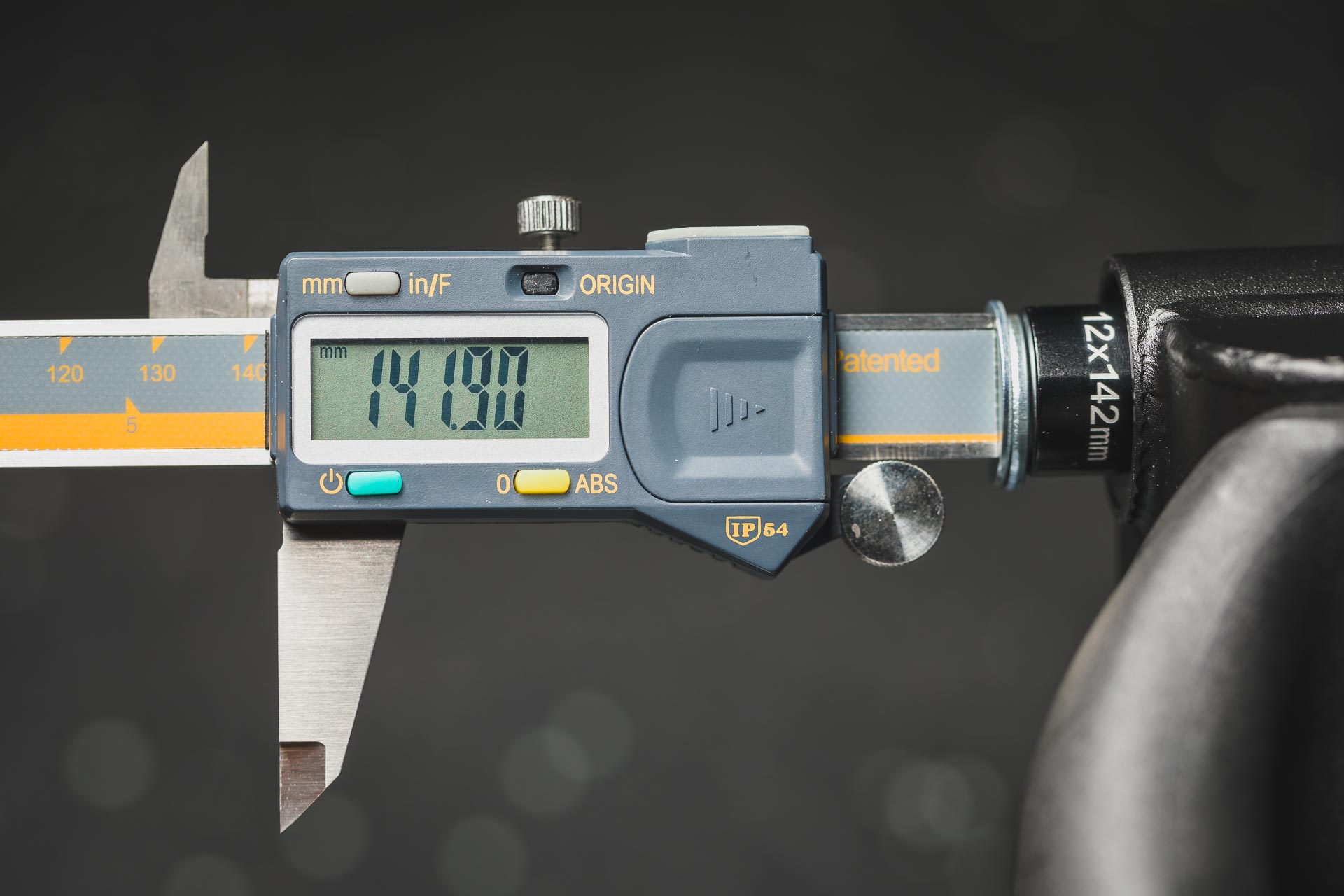 The width of the KICKR hub with the washers. 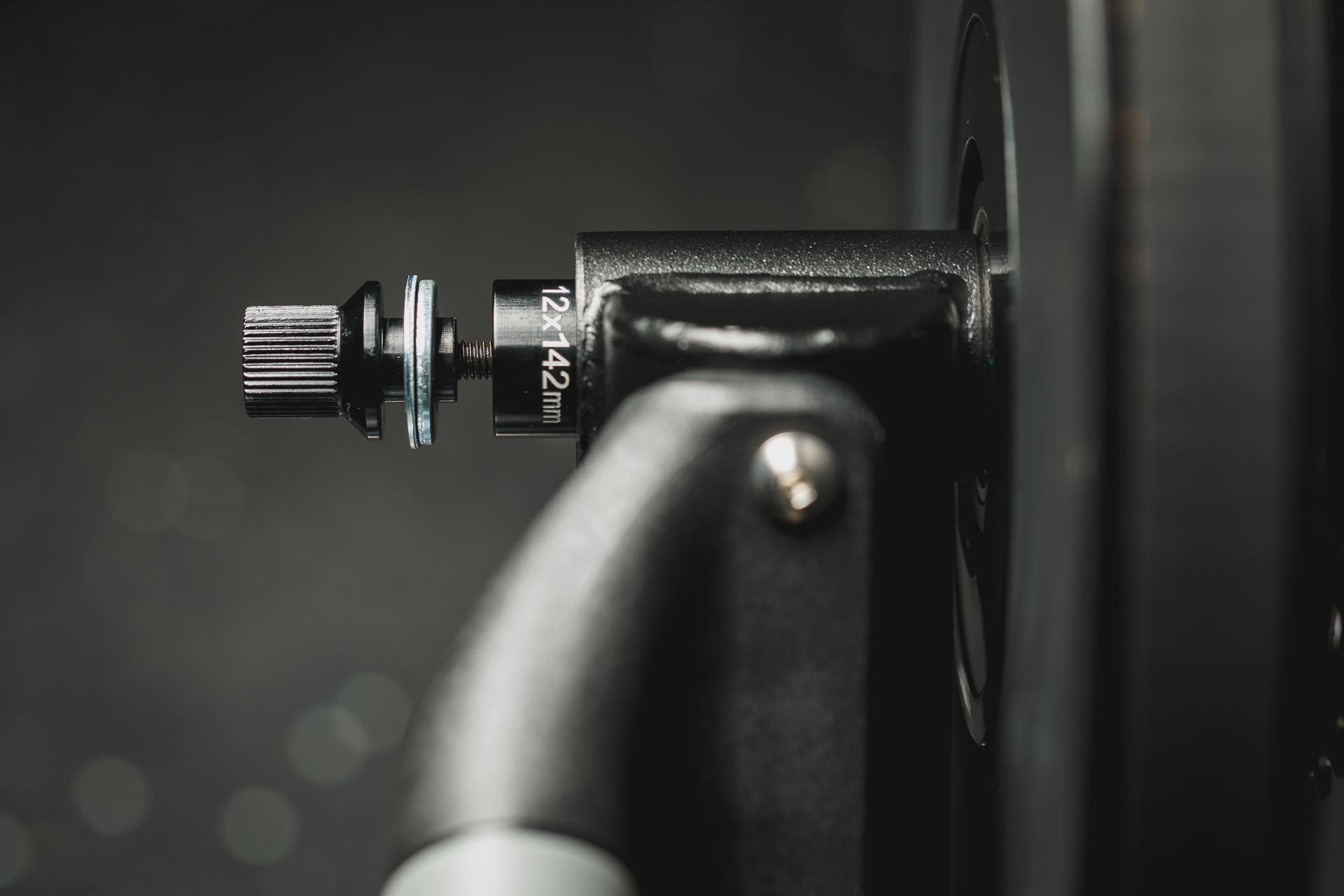 The washers loosely fitted onto the new axle adapter nut from the kit. 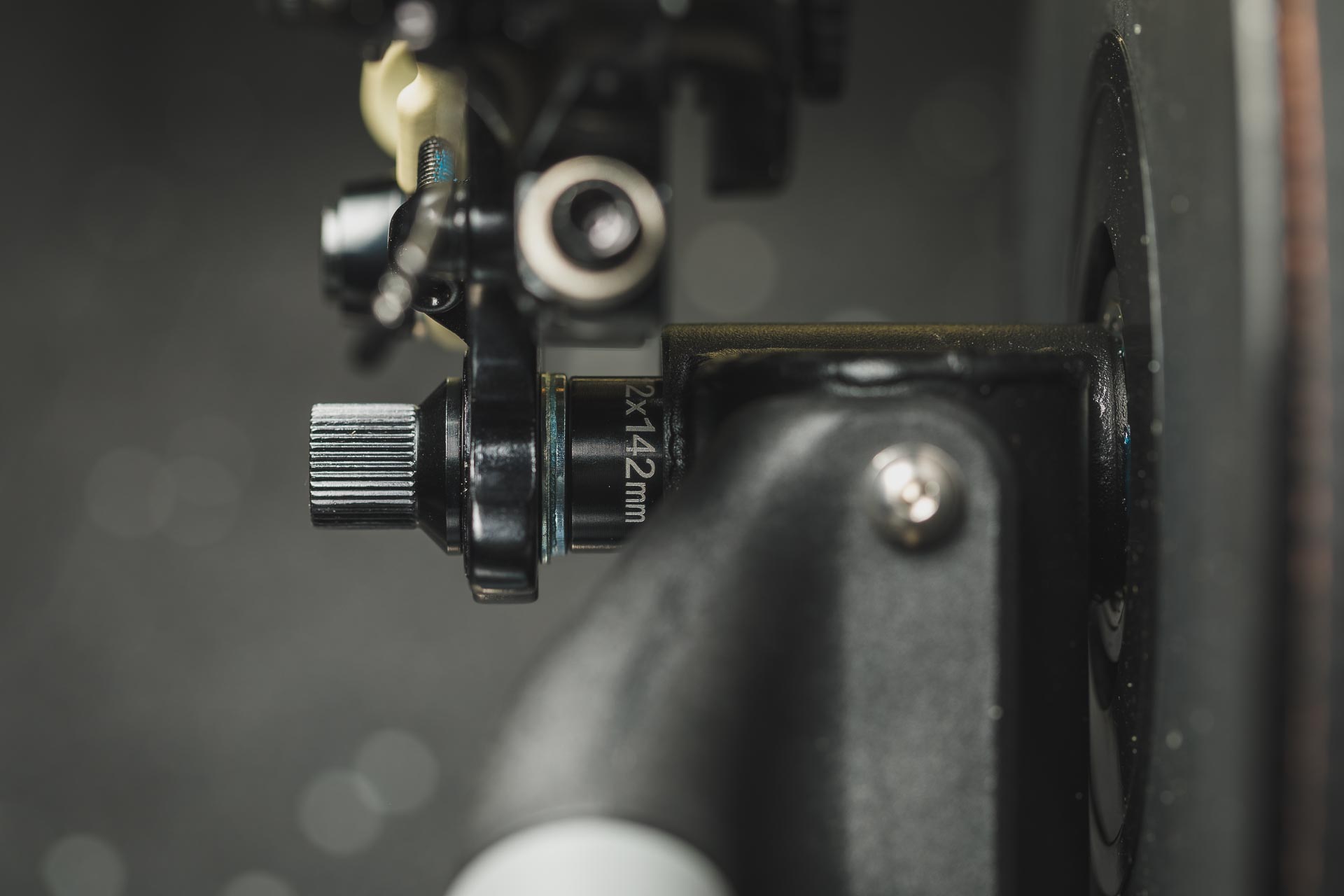 The non-driveside, all finished and tight.

That’s it! It’s really not as hard as it seems. Hit your local hardware store and find two $0.05 washers and the Wahoo adapter kit and it takes under 5 minutes to get up and running. I did all the hard work for you! You want to make sure that you aren’t pinching the bike’s frame together or spreading it apart, and that the frame is securely clamped before riding. I found I could have used the stock 130/135mm QR fitting in the KICKR along with the new axle nut, but I could not get the frame to clamp down because the nut was bottoming out against the QR fitting in the KICKR. You could if you started modifying some of the pieces (e.g., filing). 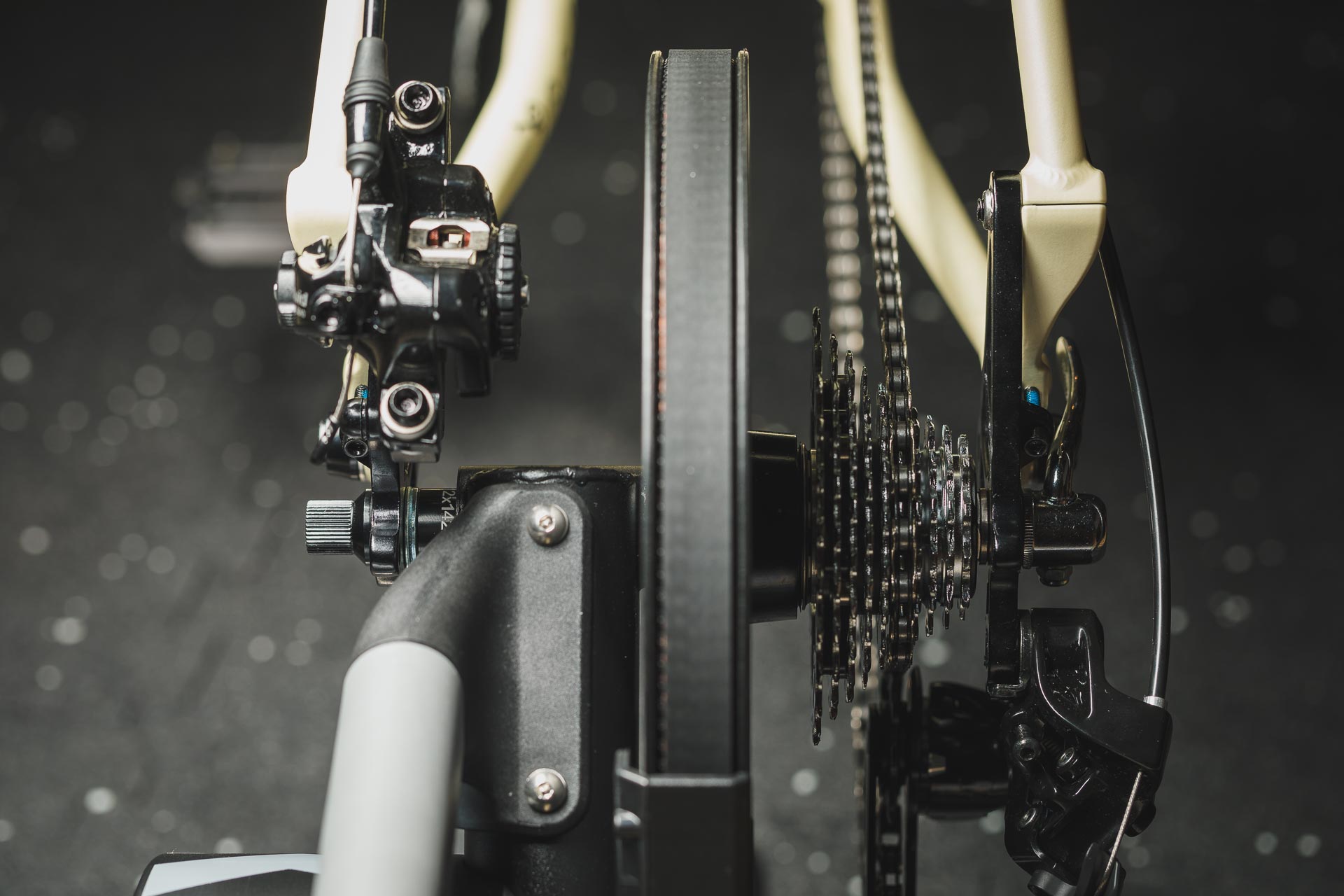 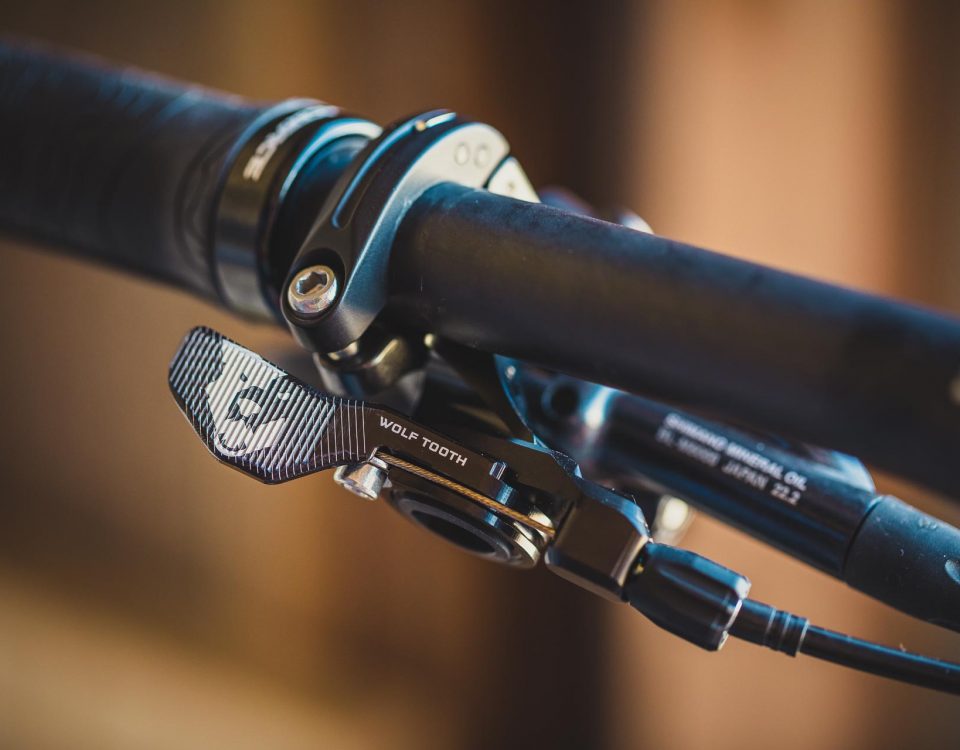